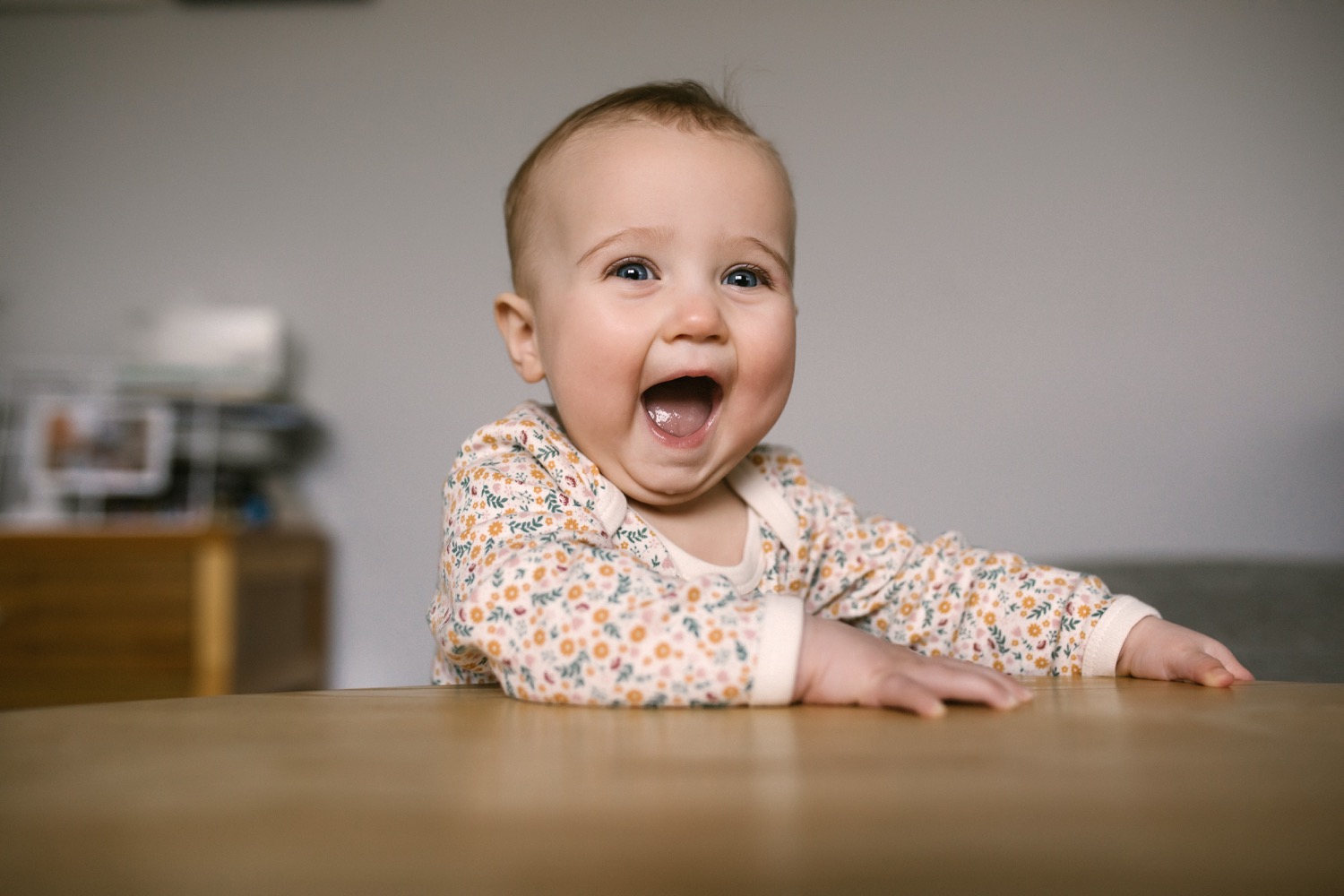 I think I say it every month, but the past month seriously flew by. So much so, I am 2 weeks late with your blog post, sorry Quinn!

At the start of Quinn’s seventh month, we welcomed home my sister Sophie, but we also said goodbye to our beautiful Grandma. It was a week surrounded by family, love and reminiscing over fond memories of our childhood. It was so special that Sophie finally got to meet Quinn. It was also the first time all of us sisters had been together since Christmas, so it was a nice reunion. However, due to it being such a busy time I forgot to get a nice photo of all of us and Quinn together – which I am still kicking myself about. Although, we did manage to get a last-minute selfie on my sister’s phone, so that will have to do for now.

Quinn Evelyn continues to surprise us. I swear she does something new every day. Last month she was pulling herself up onto her knees and now it is up onto her feet. At any opportunity in the day she will crawl to a new place to stand. Firstly, it was the coffee table with books, coasters and plants that were within her grasp. It was a constant game of rearranging objects until it got to the point where our nicely styled coffee table just had to be bare. As her confidence and strength grew, she began to brave the more dangerous spots in the house, like the kitchen cabinetry with hard tiles beneath her. As a result, she has had a few tumbles but that does not stop her climbing the same spot a hundred times over. It has made me become super aware of her surroundings. We had to lower her cot and like I mentioned above, remove all objects that are within her reach. I am unsure whether to get a baby gate for the kitchen or not? I will see how things progress in the next couple of months and go from there. Recently, however, she has learnt to bend her knees and reach for the ground when she wants to get down, instead of just falling, so that’s a plus and of course a reminder that everything is only a short phase.

Soon after learning to stand she began taking steps around the furniture. It surprised me as I thought it was fairly early to be doing that, but she is just so determined. She is the strongest little human I know. Why do they have to grow so fast?  She keeps me on my toes, and I am usually puffed from running around after her most of the day.

It has been a busy month for me after deciding to take on more work and trying to find some sort of balance. “Balance” is a word I am starting to think does not exist with mum/work life as I have felt really stretched this month. At one given moment, I can feel like I am wearing multiple hats. My brain feels as if it never has the chance to be still which gets quite overwhelming at times. It sure is a juggling act! At the moment, it requires huge organisation, planning ahead, and handing Quinn off to Matt, the Grandparents, or her Aunties. The lead up to Christmas is always a crazy time especially with my sold-out Christmas Mini sessions and wedding season ahead.

Sleep this month has been a bit of a rollercoaster. I have had a few late nights at the computer editing until 11pm and Quinn’s teeth gave her a bit of grief during the night. At 7.5 months her 2 bottom front teeth popped through! The temporary discomfort was worth it as she looks even cuter now when she smiles. She also kept waking around 10pm for a drink, so we thought it was about time to increase to two meals a day, as previously I was only giving her solids at lunch. Adding her dinner solids seemed to help her sleep through that time of night. Quinn got on a role and would inhale her vegetables resulting in great sleeps until the poor thing got constipated. Luckily I found a good “poo smoothie” recipe that was able to sort that out after a few days of having a sore tummy!

A highlight this month was Quinn saying her first word, “Mum!” She has only said it a handful of times and it is usually when someone else is holding her and she sees me or if she is upset. The first time was when Matt was trying to get her down for her lunchtime nap. She was getting herself worked up, so I walked into her room to help Matt and she reached out her arms to me and said, “Muma.” I instantly melted into a puddle. It will be a moment I’ll never forget. Moments like that make all the tough parts of motherhood worth it!

We love you Quinn Evelyn!