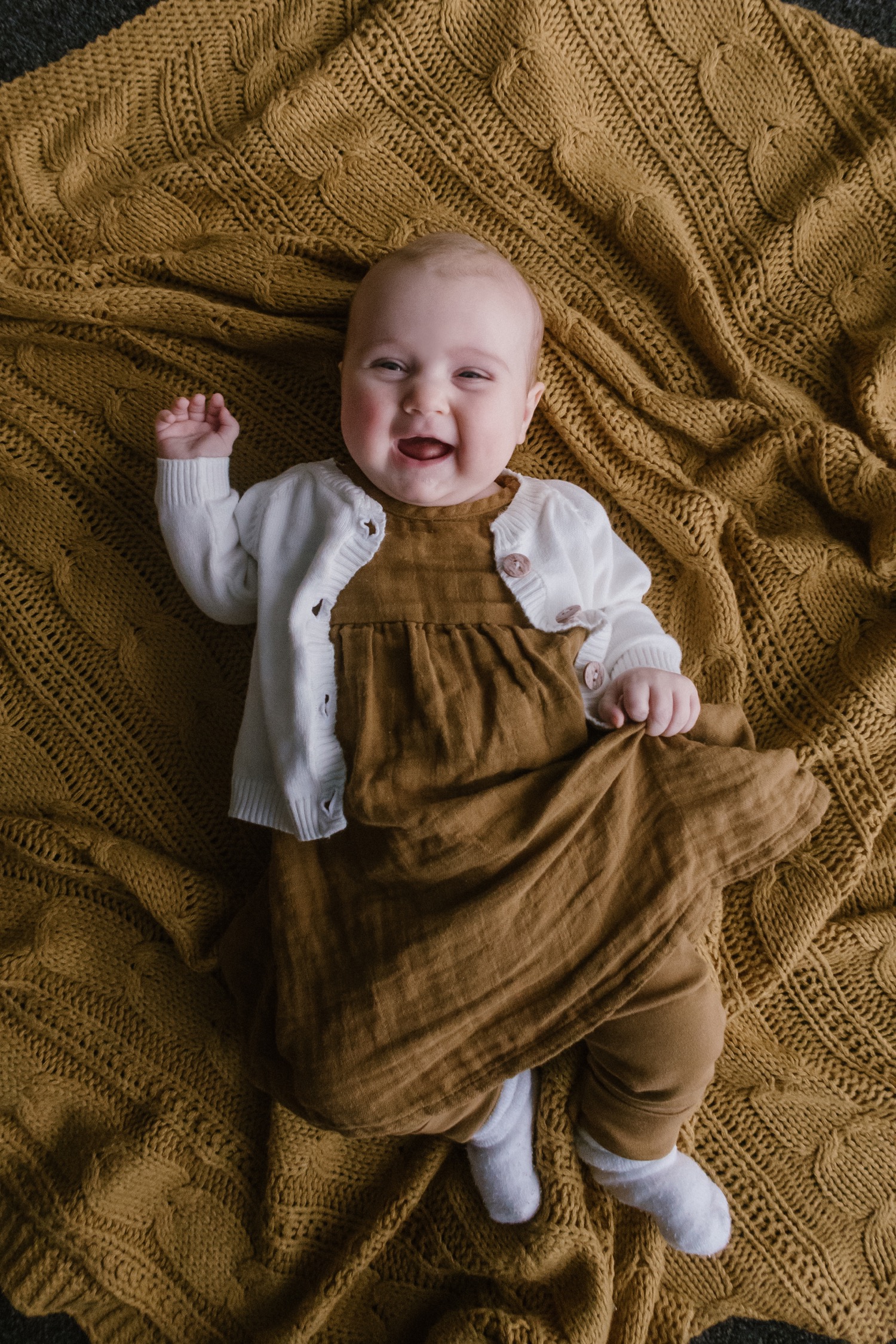 Wow! Four Months, where did you come from? I feel like I wrote the three months update just the other day. The past month of Quinn’s life has gone by in a flash. I think that is largely due to Jacinda Ardern’s announcement that New Zealand will move into Alert Level 2 from Thursday May 14th. New Zealanders did their part by staying home and now we could reap the awards. Businesses can open again, bubbles could expand, and people were able to travel domestically again! After 7 weeks of isolation, there was a real buzz in the air. Group chats were coming in thick and fast to organise real life catch ups. It was obvious that most of us were craving social interaction and gosh, it was nice to see friends and family again. We hugged a little harder and felt grateful to be in the company of those we love.

Two days after Quinn hit the 3 months mark, it was Mother’s Day! Matt, as he always does, made it extra special for me. At one point during the day, I looked down to Quinn’s cute little face and was overcome with emotion. Tears of happiness and gratitude rolled down my cheeks, I truly felt so lucky and loved. A contrast to last year’s Mother’s Day, which was a time of uncertainty and tears of loss. Little did I know, however, that Quinn was just right around the corner. Matt knew how much I was missing my own Mum, so we decided to surprise her by showing up unannounced to her house, and of course, she was ecstatic! It would be Mums first touch of Quinn in 7 long weeks. We had been so accustomed to the slower pace of life, that once we returned home, all 3 of us were feeling very exhausted! It was a good reminder for us to ease into Level 2 and to have decent breaks between each visit, so Quinn doesn’t get too overwhelmed with all of the new faces and new places.

This month we started SPACE! A support group for first time parents that cover various topics each week. Unfortunately, due to the government restrictions, the first four classes were online over Zoom which is always a little awkward when meeting people for the first time. But, the one class that we have had in person so far, was great. Chatting to other Mums with babies the same age as Quinn is so good for the soul as they understand exactly what you are going through and can offer tips and advice when needed. It will be so nice to watch all the SPACE babies growing up together.

There have been several changes to Quinn’s life this month. One of these being her first night sleeping in her own room! I thought the time was right for this transition as she was getting too big for her bassinet and she would move around a fair bit in her sleep. I would quite often wake up to her right up against the edge of the bassinet and our bed, with her legs kicked high up in the air, followed by her slamming them down. I was also so paranoid that our sheets or duvet could end up over her face, I would wake up throughout the night to move her back into the middle of the bassinet. So, we bit the bullet, and transferred her into her cot for the night. This was a change that was more difficult for me than it was for Quinn. I just could not sleep! I had become so accustomed to hearing her cute little breaths, I found it really hard not having that piece of mind. A good friend lent me her baby sleeping monitor, that has a sensor pad placed under the mattress, and as soon as the pad sensors the possibility that she has stopped breathing, an alarm would go off. Well, the first night in her own room at 4.45am we were awoken abruptly to the alarm, and it was terrifying! I have never seen Matt jump out of bed so quick. It turns out that we had the sensitivity level on the highest setting and Quinn had moved her way to the very edge of the cot! Needless to say, after that experience, we had her back in the bassinet in our room. A week later, I worked up the courage to try her in the cot again and after a few sleepless nights, for myself, I finally got used to her in her own room. Phew!

Quinn’s third month was all about the discovery of her hands, and now with that mastered, it has been about her feet. Every chance she gets she will crunch up, throw her legs in the air and stare at her feet in awe. She can’t quite reach them yet so the next best thing are her knees, which is just the cutest thing to watch. I am sure by next month she will have her toes in a firm grip, for sure.

The most exciting change this month has been to hear her giggle. Oh my, it is the sweetest sound in the world! I read somewhere that quite often their first giggle will be in their sleep, and that was exactly what happened with Quinn. The next giggle was when Matt was playing with her on the bouncer, then again with me rubbing her belly, then again playing peek a boo, and so on! It really is such an exciting and fun age!

I have been thinking a lot recently about what I would like to teach Quinn. She watches everything I do, what Matt does, and what those closest to her are doing. Babies know when our tone of voice changes and can recognise different facial expressions. Our actions speak louder than words. With everything that is happening right now in America, relating to the murder of George Floyd, it has evoked emotion, conversations, demonstrations and protests all over the world. I want to teach her equality, to treat people fairly and with respect, regardless of their race, gender, sexuality or age. It has made me look at what books we have and how I can add to our collection with diverse characters and cultures, especially for when she is a little older.

Shakti- It has probably been over a year since I’ve used it due to sensitive pregnancy skin but it has been so good to lie on again. Breastfeeding and carrying Quinn takes a toll on my back and shoulders so lying on the shakti in bed before I sleep takes me into a state of calm and is so beneficial to a good night sleep.

Sophie the Giraffe: This was a very special gift given to us when we were in Paris visiting friends for their wedding. Quinn absolutely loves her sensory toy and every chance she gets she has it in her mouth. It goes everywhere with us and its funny because people assume we’ve named it after my sister since she lives in Australia and hasn’t yet met Quinn.

Quinn has provided us with so much joy the past month; she shows off her voice, her hair is growing at a steady pace and it continues to keep us guessing to what colour it will be – currently it is mousy brown, she continues to sleep through the night (with the odd wake up now and again), she loves standing on her feet, sharing the bath with dad, and mornings spent cuddling in our bed. We look forward to the many amazing memories ahead.

[…] Last month, Quinn couldn’t quite reach her feet with her hands but now that she can, her feet have become her obsession. At every opportunity, she is holding tightly on to her toes or nibbling at them in her mouth! She is like a little contortionist; her body seems to fold right in half. I think her new-found flexibility helped her to roll over for the first time which has been the most exciting milestone this month! I will put her down in one spot and, a moment later when I glance back down, find her in another spot. She has fierce determination when attempting to get to her toys that I usually put just out of her reach. She often grows frustrated when she is struggling to reach what she has got her eye on and will usually let me know with a sigh, squeal, or an unhappy glare my way. […]

This site uses Akismet to reduce spam. Learn how your comment data is processed.